Custom playing cards really took off with the arrival of crowdfunding platforms like Kickstarter in 2009. As a result, today we have a thriving marketplace that is flooded with a plethora of amazing designs. Less than a decade after the advent of Kickstarter, the market today is in many respects crowded and fiercely competitive. But the crowdfunding era has also produced more diverse designs, including transformation decks, which consist of unique playing cards where the pips have been creatively incorporated into a larger artistic image.

There are some modern transformation decks that have been produced by larger publishers like Art of Play. But the majority have been created by individual designers who have capitalized on the new marketplace and possibilities opened by crowdfunding, in order to publish creative designs that otherwise would never have seen the light of day.

For his first deck, he set himself a goal of creating one card a week, thus commencing a very intensive project that required an enormous amount of work. But the results were stunning, as you can see here. One other notable feature of some of his decks is that the court cards combine together to make a panoramic image. 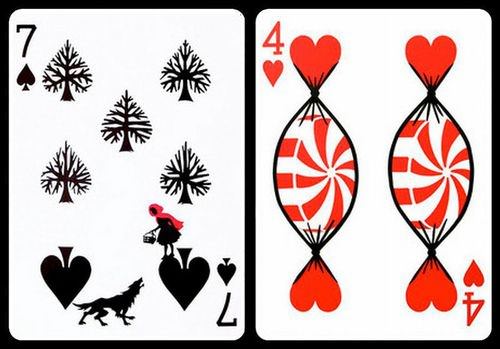 The Ultimate deck was produced by Art of Play's Dan and Dave Buck, in collaboration with award-winning design firm Stranger & Stranger, and features different images by a range of artists. They describe the concept as follows: "Every single card in the Ultimate Deck is represented with a story, incorporating classical art, as well as works from today's leading illustrators."

Many of the cards take considerable liberties with the location and style of the pips, so strictly speaking this would be considered a semi-transformational deck. Some cards look a little macabre or dark, but the majority of the artworks are simply gorgeous, featuring attractive and highly creative images.

The Odd Bods deck is exactly that - odd, but artistic! Each of the court cards is given a unique character and quirky personality. More importantly for our purposes, a transformation style is evident throughout, especially in the oversized aces. But the number cards also feature pips that have been turned into creatures, or are feature animals interacting with the pips by means of a range of activities and movement.

The artist behind this deck is Jonathan Burton, who was commissioned to design these cards in 2012 by the Folio Society. 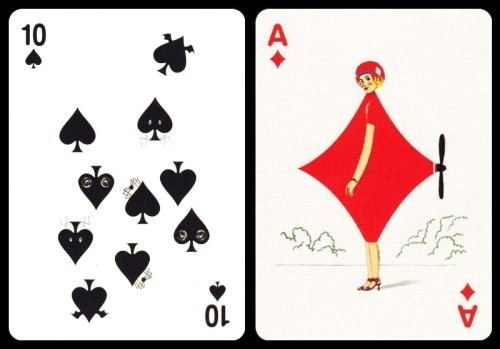 "Pipmen" is a term Ben Jones from Elephant Playing Cards has coined for the characters on his cards, which he explains as a combination of pips with stickmen. Typical of the decks he designs are "little stickmen figures interacting with the pips to create a unique scene."

Ben produced his Pipmen decks with the help of Kickstarter, and has since gone on to produce several different editions of these wonderfully creative decks. It is a brilliant concept, and Ben has done some terrific work in creating these, as you can see from the examples here. These cards are also very functional and playable, with very clear indices. 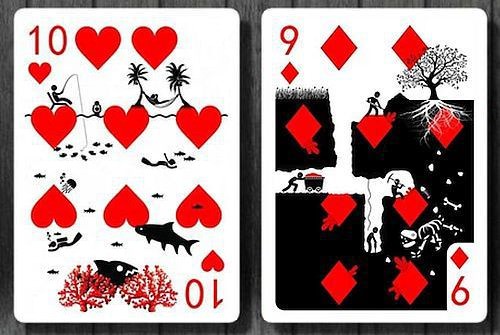 While the Pipmen decks are amazing in themselves, perhaps the best yet is the Pipmen World deck. As with the earlier Pipmen decks, every single card in this deck is a self-contained picture, now in full colour. Here (on the left) we have some adventurous Pipmen climbing the snowy mountain, and (on the right) some hard-working Pipmen digging tunnels below the earth. 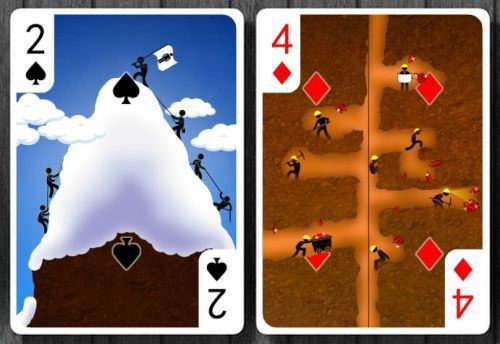 But now for the really fun part: Ben has designed the artwork so that all the individual cards can be put together to form a single giant panoramic image! So when the cards are placed alongside each another, they produce a larger picture, which you can see taking shape below.

Shown here is the Full Art edition of Pipmen World, which has the same artwork as the original, but eliminates the distraction of any borders, to heighten the polyptych effect, and make the panoramic effect even more impressive! It is easily one of my all-time favourite decks! 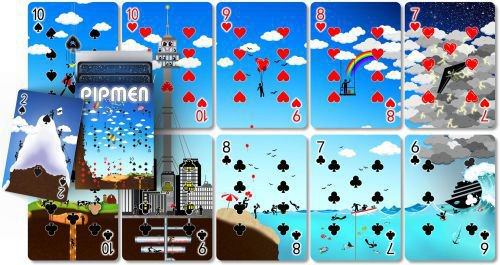 I have been a long-time fan of Natalia Silva's beautiful folk art style. Inspired by traditional Russian art, she has produced several stunning decks. At the end of 2017, in collaboration with Penguin Magic, she produced a popular Christmas deck. The design emphasized seasonal imagery, with the traditional green and red of Christmas being a prominent feature.

This deck is full of whimsical and playful images, with Santa, snowmen, reindeer, and penguins all making an obligatory appearance somewhere or other on the 54 unique designs. Many of these use transformational pips, such as the Six of Hearts shown below, where the pips have been turned into fish. On other cards the diamonds have become streamers or Christmas lights, and the clubs have turned into musical notes or Christmas trees. The creativity here is a real delight to look at and enjoy! 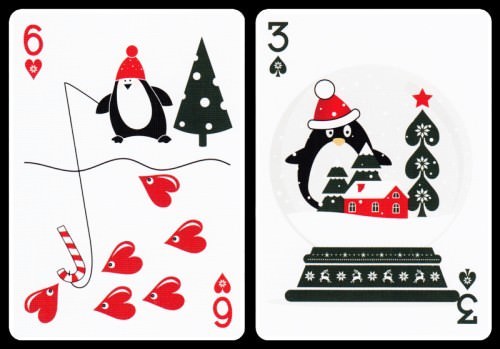 The beauty of transformation decks lies in the creativity and ingenuity required to make them. Being able to incorporate pips into a larger artistic whole that is imaginative and original is a real challenge! But some wonderful works of art have emerged as a result, and that turns these decks of transformation playing cards into miniature art galleries that are highly collectable. While the primary appeal of these decks lies in their artistic merit, many of the modern era decks are just as functional as they are beautiful, and can also be used for card games or even card magic.

Where to Get These Transformation Playing Card Decks?

Fortunately these modern era decks are usually readily available, and PlayingCardDecks.com is one place where you will find most of those featured above:

Also available from PlayingCardDecks.com are several decks of transformation decks created by Peter Wood in the early 2000s, which you can learn more about here.

Do you have a favorite modern era transformation deck? Let us know below!