In a previous article I shared a list of ten outstanding self-working card tricks, which I consider to be the best of the best. But it's always tough to produce a list of "the best", when there are many other strong effects that could also have been included. So here some other worthy contenders, which on any given day could also make a Top 10 list. 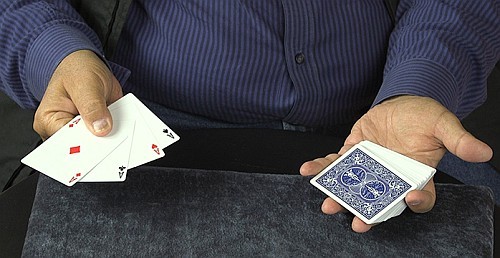 This classic trick features three moments of increasing surprise: first there's the coincidence of two selected cards showing up at the same time, then four aces are revealed simultaneously, and finally there's the miracle of all the cards in the remaining piles being sorted separately as red and black. While this routine requires somewhat of a set-up and involves some longer phrases, it can be mind-blowing if done well, and it's hard to believe that it is even self-working. Some magicians even use it as a closer in their performances, given how strong it is. The surprising colour separation at the end is really amazing, and Colombini often used this as a highlight in his own lectures and performances.

● Neither Blind Nor Stupid (Juan Tamariz)

Two spectators both select and return a card to the deck, after which you repeatedly ask the question "can I know anything about the cards?" The spectators keep mixing the deck in various ways, without the magician even touching the deck, until it is conclusively demonstrated that the magician now cannot possibly know anything about where they are in the deck - and yet he does the impossible by identifying both of them. This trick needs a setup, good audience management during the performance, and is longer than most. But it incorporates active involvement of the spectators, and when combined with good showmanship, it is very entertaining, seems truly impossible, and can generate great reactions of astonishment. It's that good that it was even used as a successful fooler on Penn & Teller's Fool Us.

● Further Than That (Stewart James)

Your spectator selects a random number that they use to select a random card in the deck, and follows some instructions to completely lose it in the deck - all while you're not looking. You then replicate this procedure, to demonstrate that finding their card should be truly impossible. Yet when you deal cards to spell "impossible", you turn up the selected card! It may not be quite as flashy as some of the other tricks in this list, but it is a favourite for many, and can be done impromptu with a borrowed and shuffled deck. A good presentation that really emphasizes the impossibility of what is about to happen really helps it go over well.

Two spectators each select a card by freely cutting to anywhere in a face-down deck. The deck is spread to reveal two face-up Jokers, and these each reveal the exact position in the deck where the two selected cards can be found. An added kicker comes at the end when the Jokers are turned over to show that the number of cards dealt has been written on their backs in advance. The principle behind this is self-working, yet is so deceptive, that it's rightly been said that you'll even fool yourself while doing it!

John Bannon is a master of self-working and sleight-light magic. The thinking behind many of his tricks is devilishly clever, and the psychological elements of magic that he will introduce you to will stretch your mind and open up all kinds of new possibilities. "The Bannon Triumph" has already been included above, but his genius deserves a special section in this article, covering some more of his best. His trick "Twisted Sisters" and its closely related "Duplicity" are regarded as one of the top packet tricks of all time, but because they either use gaffed cards or some sleight of hand, I haven't included them here. His tricks can be found in his books, which are storehouses full of self-working treasures, as well as the excellent Move Zero series of DVDs produced by Big Blind Media. Here are some of his best, and my personal favourites. 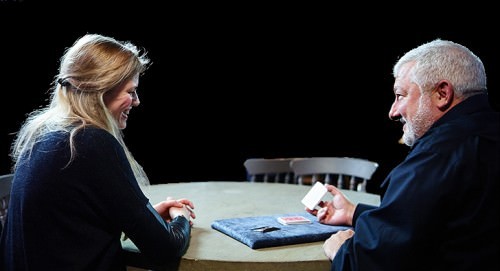 In mini-drama consisting of three phases, your spectator first chooses a card randomly, and shuffles it into a packet which they bury it in the deck. You deal cards one at a time, and the spectator is to mentally spell out each letter of their selected card, and then think "stop". Not only do you stop at exact the same moment as your spectator, but the card you arrive at is in fact their selected card! This is engineered and constructed cleverly so as to seem completely impossible, plus it has a unique way of revealing the selection - the best part is that the card you are holding in the end is your spectator's card.

This effect is presented as a bet, where the spectator cuts the deck and then gets 51 chances to turn over cards in a search for a named card. At the end, remarkably the one card out of 52 that is not turned over is the chosen card. While somewhat procedural, it is justified by the spectator doing virtually all the card handling, and the presentation requires them to be the one finding one specific card. Not only is all the hard work is done by the spectator, but the procedure also helps disguise the the method of getting the selected card out of play until the grand finale. Tension builds at the ending, and the fact that this involves a slightly different procedure to narrow down the final few cards down to a single one helps makes it more interesting.

The spectator merely thinks of any card in the deck, and they secretly deal off cards corresponding to its value from a shuffled deck. Now you take a card from the remainder of the deck, and ask the spectator to find their card in the deck. But they can't find it - it's the one card you've removed! This trick does have an alternate ending, where you produce the mate of their card. Bannon provides a motivation for every detail of the actions necessary for the ingenious method, and the clever patter illustrates Bannon's brilliance at psychological deception, making the outcome always look like the intended result.

I have always loved the concept of a head-to-head game of poker, where you deal 10 cards to you and your spectator, with the spectator making all the choices about which cards to get. That's what happens here, and your spectator ends up with a full house, while dealing you a royal flush - no matter what they choose. Unlike many routines of this type, it cleverly doesn't use equivoque or a Jonah card as part of the method.

Two spectators each secretly select a number between from 1-20, and secretly deal down to that card to determine the suit and value of an imagined third card. When the spectators reveal the numbers they've secretly chosen and add them together, amazingly at that place in the deck is the very card created by the two other cards! This takes the principle of Gemini Twins to another level, and the overall effect is a variation on the popular Any Card at Any Number (ACAAN) effect, which is considered a holy grail of card magic. Super strong, and yet very easy to perform once you know the secret. 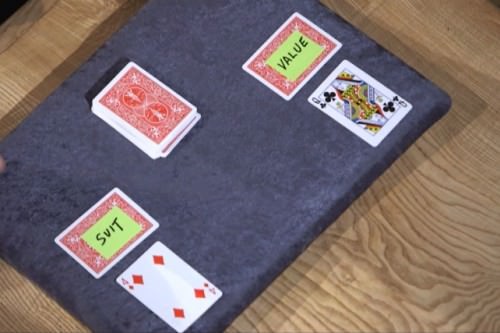 Not only are self-working card tricks easy to learn and perform, but they are ideal for focusing on your presentation. The ones listed here are all fine examples of the art of card magic, and compare very favourably with any card trick that relies on sleight of hand.

In recent years several great videos have appeared from Big Blind Media, which have helped self-working card tricks emerge from the shadows that they usually occupy. The terrific Move Zero series by John Bannon and the Ultimate Self-Working Card Tricks series (Vol. 4 was just released) are both fine examples of this exciting new trend in magic. To learn how to do some of the very best self-working card routines like the ones covered here, those are excellent DVDs to start with, and I highly recommend them.

Just don't make the mistake of being too dismissive of self-working card magic. Fine tricks like the ones above show that they have a tremendous amount of potential. Now that you're armed with a list of some of the very best, go hunt these down, and have fun with these and more!

Where to get started? Here are my top recommendations for the best instructional materials to teach you the best self-working card tricks:
● Books: Card College Light series by Roberto Giobbi
● Videos: Ultimate Self-Working Card Tricks series by Big Blind Media