From time to time I come across a comment that suggests that there hasn't been much innovation in playing cards in recent years. Have we reached the pinnacle of playing card production, and are playing cards the very best that they'll ever be?

I think we can all agree that the process of manufacturing playing cards has improved significantly since the 19th century. We associate terms like air-cushion finish, linoid finish, and cambric finish with famous brands like Bicycle, Tally-Ho, and Bee, but most people realize that these antiquated terms refer to printing processes using cloth materials to apply the finish to the cards at the end of the printing process. These processes have been replaced with superior technology quite some time ago already, and have long been obsolete. This means that the high quality of today's playing cards that we've come to expect from industry leaders like USPCC has been around for quite some time already.

But that doesn't mean that there hasn't been any innovation in recent years. In the last number of years playing card manufacturers have been experimenting with techniques like UV spot printing and hot foil stamping. Tuck boxes are usually the first places where we see the results of this innovation, and tuck boxes with embossing and metallic foils are hardly uncommon.

But what about the use of foil on the cards themselves? Creators like Lotrek are highly respected for their innovation in this area, but his extravagant foil decks are usually printed in relatively low quantities, and are geared towards collectors, rather than intended to be durable and practical enough for intense use by game players. However there has been real progress in the technology used for this in recent years. There are now ways to have foil on your cards in a way that is affordable, while ensuring that the cards evoke a look of luxury without compromising durability. And that's exactly what this article is about, so let's take a closer look at hot foil and cold foil techniques that are being used for some modern playing cards. 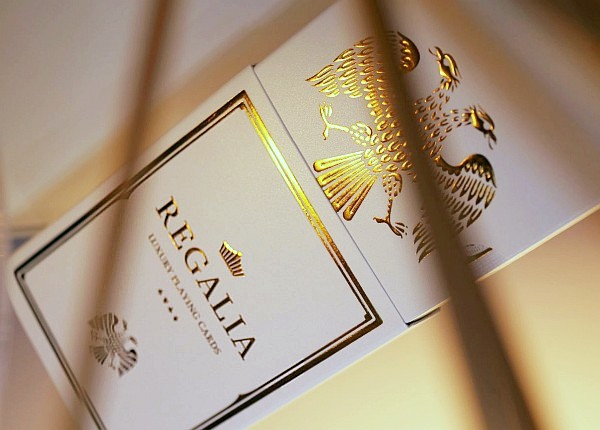 How does it work?

Hot foil stamping is typically described as the process of using heat to transfer a layer of metallic foil onto a surface, allowing it to adhere onto the paper. This is quite commonly used for tuck boxes, and is often combined with embossing, because having raised and glossy surfaces can create a particularly stunning effect. It results in a metallic gleam that is far more shiny than what the use of metallic inks alone can accomplish. If you want bling on your deck, hot foil is one of the best ways to achieve this.

The same process can be applied to the cards themselves. The reasons for doing this are immediately obvious: who wouldn't want to be able to have this level of reflective shine on each and every card? Some decks will use metallic inks, but these don't nearly have the same level of shine as hot stamped foil. Metallic inks tend to have a more dull sheen, and while this can be noticeable if light shines on it, it can also go completely unnoticed. In contrast, metallic foil has an immediate look and feel that makes it stand out. 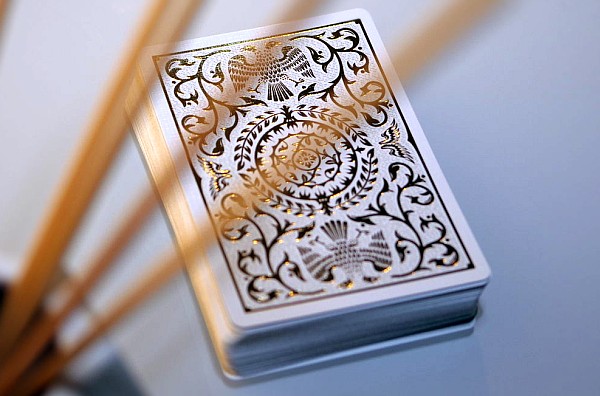 How does it look?

But there are real disadvantages and challenges that are part of this process too. Perhaps the biggest challenge is durability. It's one thing to have metallic foil on your tuck box, which gets minimal wear from handling. But it's another thing to have this foil on each and every card, where it has to stand up to intense shuffling, and where it is essential not to wear off too easily or quickly. Cards with hot stamped foil tend to be more slippery than a regular deck, and the handling will be noticeably affected.

Another disadvantage is that hot foil printing can typically be only applied to aspects of a design, such as letters or a simple bold image or shape. Gradients and halftone images are simply impossible with this technique.

A further difficulty with the process used for applying hot foil is the impact on the cards themselves. The heat used for this process, and the need for a special hot stamping die (printing plate), sometimes disfigures the cards slightly. Often you can see the shape of the imprinted foil on the reverse side of the card.

Even so, a deck that uses hot stamped foil on the card backs tends to look stunning, and is almost certain to impress anyone who sets their eyes on it. Some of my favourite examples of decks in this category are ones which use iridescent foil, like the Chameleon Green deck by Asi Wind, and especially the Alloy decks that was produced by PlayingCards.net. 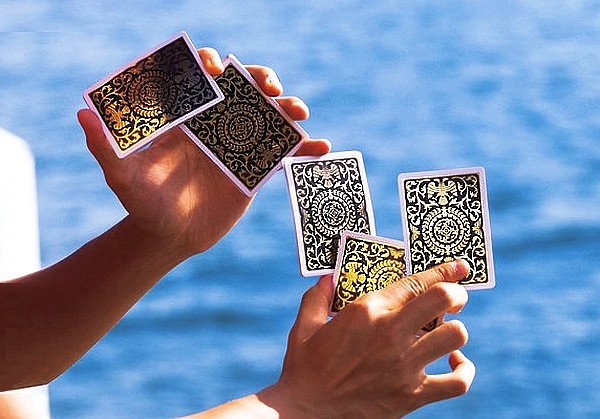 How does it work?

According to playing card manufacturer EPCC, they were the first to apply hot stamped foil to playing cards themselves, and they themselves acknowledge that it is somewhat of a less precise approach, and is not ideal for an intricate design. The fact that some designs were beyond the theoretical boundaries of hot foil led them to research alternative options. That in turn led them to experiment with cold foil techniques, and in 2017 they became the first to manufacture playing cards that used cold foil.

Like hot foil, cold foil printing involves applying metallic foil to card stock, but it is a more advanced printing technique. The process evolved from hot foil stamping, making it not only more cost-effective and convenient, but also improving its precision and its application. Rather than hot-stamping something on the outside with a single layer of foil, cold foil involves using foil as an underlying layer that you then print on top of with other inks. There is still some heat used in this process, but it is lower than what is needed to fuse the magnesium backing of hot foil to cards. 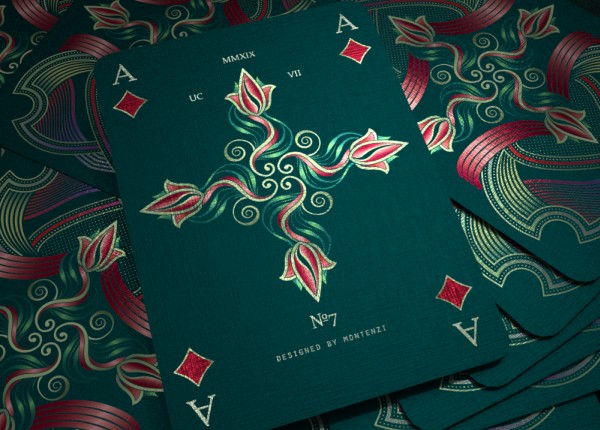 How does it look?

The first advantage of this printing technique is that because you can print a variety of other colours on top of the actual foil, you can create what effectively looks like a variety of different coloured foils. So while hot stamped foil usually involves giving emphasis to a single metallic colour, cold foil gives the impression of a range of metallic foils. Using this technique you can even print gradients with changing colours, which only serves to magnify the shine and changing colours even more, especially when the cards are held up to the light.

A second advantage of this printing technique is an increased level of precision. You can apply it to high resolution images and thin lines, which was previously not achievable with hot stamped foil with a real degree of reliability.

A further benefit of this printing technique is that the cards themselves don't need to be subjected to as much heat during the process. While hot foil printing has the potential to slightly warp cards and cause visible indentations on the reverse of the card, the even pressure used as part of the cold foil process avoids this problem. It's also easy to use cold foil techniques on both sides of the cards at once, rather than just a single side, which opens up more design possibilities. 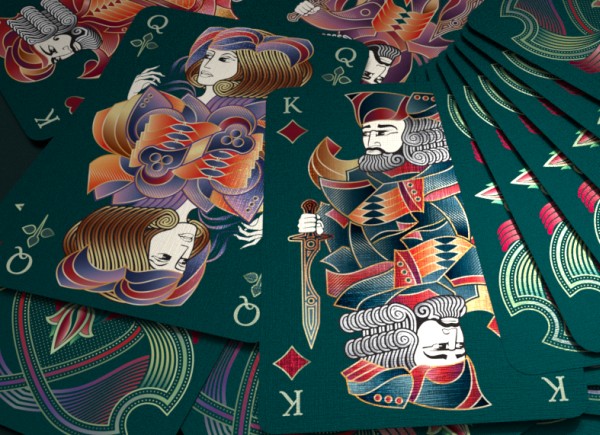 Cartamundi is one of the industry leaders in using cold foil technology for printing playing cards, and the cold foil they used for the 2019 United Cardists deck by Montenzi is absolutely incredible. It was rightly nominated for this year's Diamond Award as `Deck of the Year' by 52 Plus Joker. I've seen a lot of decks, but when I got this one recently, I was blown away by it. It's genuinely spectacular, and like nothing I've seen before.

Cold foil is used for the card backs, which feature a spectrum of colours that looks dazzling in the light. But perhaps even better, there's cold foil on the faces as well. The court cards look especially outstanding especially when held up in the light. The pips and indices on all the cards have a foiled look too, using a range of colours, and the eye-catching result is absolutely breath-taking.

But do these good looks stand up to intense usage? I got two of the Montenzi decks, and absolutely hammered one over the course of several weeks in an effort to find out. It held up surprisingly well. Like any borderless deck with non-white edges, the edges will show signs of wear first. But the foil on other parts of the deck still looks pristine, despite several weeks of heavy shuffling. There's a couple of places where you see miniscule signs of the printing wearing off and where you can see the foil underneath, but no more than you'd expect with wear on a regular deck.

Admittedly Cartamundi's B9 embossing doesn't look as smooth as a more typical air cushion style embossing pattern will. But they've obviously perfected the process so that the embossing pattern remains intact despite the addition of cold foil. So unlike my experience with hot foil cards, the handling of these cold foil cards feels almost identical to a non-foil deck. The Montenzi decks use slimline stock which feels feather-lite, and even after significant wear, they still fan quite smoothly and faro very well. I can't speak highly enough about how impressed I am with them. Everyone I've shown them too has been singularly impressed and awed by them. 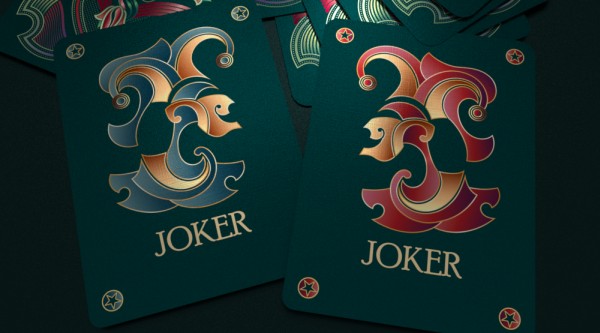 If these new cold foil playing cards from Cartamundi are any indication, it's obvious that we haven't yet reached the pinnacle of playing card production just yet. These wonderful playing cards are unlike anything on the market even five years ago, so we are still seeing genuine innovation in terms of looks and quality.

Cold foil techniques are more economically viable than hot foil techniques, and open up a wider range of possibilities that were previously just not possible. This can only be a good thing for the playing card industry, and we can expect to see this luxurious metallic look being used by more creators in coming years, as they endeavour to increase the visual appeal of their playing cards with the help of this new printing technique. Creators and designers have all the more reason to experiment with cold foil now that playing card manufacturers have found a way to employ it without compromising the durability of their playing cards.