We all know that playing card games can become super competitive. As a great quote from Finley Peter Dunne goes: "There are no friends at cards or world politics." Similar is this wisdom from Charles Lamb: "Cards are war, in disguise of a sport."

But how about using playing cards as an actual weapon of war? Certainly you could injure someone seriously if you can throw playing cards like past and present world record holders Ricky Jay or Rick Smith Jnr, who can throw a playing card accurately and quickly enough to slice fruit. But there are more subtle ways that playing cards have genuinely been used in wars, and what follows are some fascinating case examples!

When General Sam Houston led Texas to freedom in the battle of San Jacinto (1836), the decisive battle of the Texas Revolution as part of the war for independence from Mexico, there were Mexicans fighting on both sides. So how could the Mexicans who were fighting for freedom with the Texan army be distinguished from those who were part of the Mexican army fighting to maintain control of the land?

Here's the solution General Houston apparently came up with: He instructed the "Mexican-Americans" to put playing cards in their hat-bands so that the Texans could easily differentiate them from the Mexican soldiers. Doesn't that give a whole new meaning to "showing your hand"?! 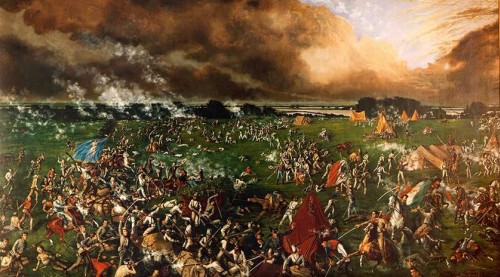 In World War II, playing card manufacturer USPCC teamed up with military forces to create decks of cards that had a full escape map printed between the two paper panels that are stuck together to make each card. Each one had a segment of the overall map, and after soaking the cards and peeling apart the two layers to access parts of the secret map, these could be puzzled together to create a complete escape map that Allied prisoners could use to help them escape from German POW camps and out of Nazi Germany. The decks were delivered to POWs in Red Cross packages.

Even today you can buy an Escape Map deck which celebrates this ingenious "map deck", although fortunately the map of this commemorative deck is on the card faces, so you don't need to ruin the deck to make the map! 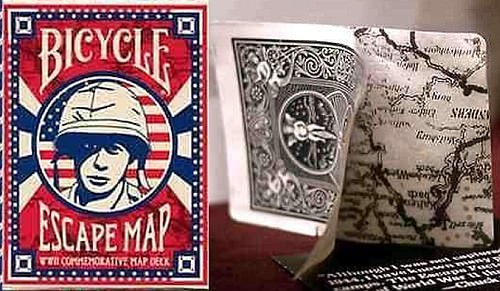 In the Vietnam War, decks that consisted solely of Aces of Spades were produced for American soldiers, since this card was considered a symbol of death to their opposition forces, and soldiers would wear them on their helmets. The idea was that the Viet Cong was superstitious, and seeing this Ace would terrify them.

In retrospect, this practice appears to have been based on a false belief about the Viet Cong. But regardless of whether or not this psychological warfare actually worked on the enemy, it certainly did help improve morale of American troops! (For more on this story, see a detailed discussion here.)

During the Gulf War, troops that were part of the 2003 invasion of Iraq were issued playing cards that featured pictures and information about the 55 most wanted members of Saddam Hussein's government, with Saddam himself featured on the Ace of Spades. Given that troops would often play cards during down time, they would become familiar with the names, faces, and titles of wanted Iraqis while playing card games, and thus could more easily recognize them in the field. (You can learn more about this "Most Wanted deck" in several places, e.g. here. You can even see a list that documents the eventual status of the 55 most wanted men as of 2010, e.g. here.)

This is not the first time that playing cards have been used in this fashion, with previous instances including the US Civil War, World War II, and the Korean War. There have also been reports of US soldiers handing out playing cards as "calling cards" during Operation Iraqi Freedom and during Operation Enduring Freedom in Afghanistan; these cards would include an anonymous tip line phone number that locals could use.

Multiple decks of playing cards have been created as Ordnance Recognition decks, and were designed with an educational purpose for identifying unexploded ammunition and weapons that the public might stumble upon by accident in war zones. These decks are aimed to assist people at risk (e.g. soldiers, civilians, aid workers, de-miners) to identify and learn about the threats they face from unexploded ordnance.

Such Ordinance Recognition decks are still in use today. They are typically bought by UN and government agencies to distribute to their staff and to local people, and it is believed that they actually help save lives and limbs. 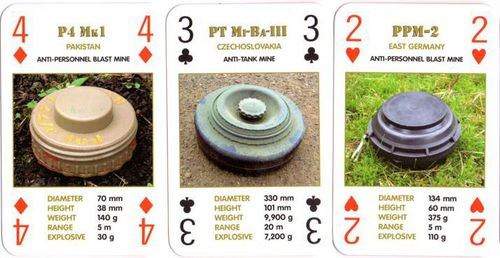 Airline Spotter decks have been also in times of war to assist anti-aircraft gunners recognize aircraft silhouettes, ensuring that they fired only at the enemy and not by mistake at allies. The cards identify 52 different aircraft including Allied bombers and fighters, as well as Axis aircraft from Germany, Japan, and Italy. Each card features detailed silhouettes from three different angles: front view, side view, and a view of the bottom of the aircraft, as it would be seen by a ground observer. Also produced were Naval Spotter decks, which featured cards with silhouettes of U.S. and foreign warships from the 1940s–1960s.

These decks served a dual purpose as entertainment and as a teaching aid. Soldiers inevitably would play cards during moments of down time, and using the card faces as a way of making them familiar with important information is genius. Replicas of these spotter decks are still available today from US Games System.

Finally, there's the ongoing war against crime. Playing cards have been used to help solve actual cold cases in the fight to bring criminals to justice. Details from unsolved crimes were printed on the faces of cards along with victim photos, and these decks were given to prison inmates in many states across the United States.

Did it work? Absolutely, and at least 40 cases have been solved directly as a result of this initiative. (For more on this story, see an article here). Who would ever thought that a prison poker game could have this kind of pay-off?

So there you have it: playing cards have actually been used as weapons of war! So maybe you should just stock up on some of your favourite custom decks - you never quite know when war might break out, and when you might need them!

Where to get them? You can get your own slice of history by picking up the commemorative Escape Map deck from PlayingCardDecks.