Many of us have our own growing collection of playing cards, and probably the thing that interests us the most is our "personal best" for the number of decks we possess. But playing cards have also been the subject of some fascinating world records. Perhaps some of these will inspire you to new heights with your playing cards!

● Largest (collection): Let's start with the category that many of you will be wondering about - who has the largest collection of decks, and how big is it? According to the official Guiness World Records, the current record holder is Liu Fuchang of China, with 11,087 different sets of playing cards. Alternatively, if you just collect Jokers, you'll need to beat Tony De Santis of Italy, who has 8,520 of them - all different!

● Largest (cards): The record for the largest complete deck of playing cards is quite impressive, considering that it required a full set of cards. In May 2016, Claes Blixt put together a beast of a deck that weighed over 200kg, with cards that were 158.4cm high and 104.4cm wide. Much bigger yet is the largest ever human playing card. It was the Ace of Diamonds, and consisted of 600 people at the Turning Stone Resort Casino in 2013.

● Memorizing (single deck): In the early 1990s, the record for memorizing a shuffled deck of playing cards was more than one minute. Ben Pridmore of Great Britain was the first to get this time to under 30 seconds. But his record of around 25 seconds was eventually slashed by Zou Lujian of China at the 2017 World Memory Championships, who managed to memorize a complete deck in just 13.96 seconds! You can increase the difficulty of this by attempting it underwater. Poland's Krzysztof Kuich stayed underwater without an oxygen supply to memorize an entire deck, which he then arranged in 4 minutes and 27 seconds. The most cards memorized unassisted while underwater is Christian Schafer's 56.

● Memorizing (multiple decks): In 1993, Dominic O'Brien set a record by memorizing 40 complete decks (that's 2080 cards altogether!) with only one sighting of them all, and only made one mistake in recalling them. In 2007, Canadian Dave Farrow took around 14 hours to memorize 59 separate decks (that's over 3,000 cards!) on a single sighting, while the recall took around 9 hours. This record still stands today after more than 10 years. As for the most decks memorized in one hour, that is 37 decks (1,924 cards!), achieved by Munkhshur Narmandakh, also at the 2017 World Memory Championships.

● Holding (cards): Think you can produce a nice fan? To beat the world record for holding the most cards in one hand, you'll need to beat the incredible number of 326. This was set by Ralf Laue of Germany in 1994. The exacting requirements for this record included the need to have the colour and value of every single card visible, using no aids. Abandoning the "fan" requirement of course makes things much easier, as Jack Webster proved in 2010 by holding no less than 992 cards in his hand at once.

● Holding (decks): Never mind how many cards you can hold in one hand; how many decks can you hold at once, using just one hand? The current record of 55 is held by Kaleb Morgan, which he's held since November 2015. Surely one of our readers can beat that? This next category also sounds quite beatable: the longest time for balancing a deck of cards on your elbow is claimed by Gasper D'Anna, with 3 minutes and 42 seconds.

● Throwing: There are special techniques you can learn to throw playing cards long distances and at incredibly high speeds. Learning the basics of card throwing is actually not that difficult, while instructional DVDs will teach you advanced techniques. Ricky Jay made a name for himself breaking card throwing records. But if you want to beat the best of the best today, you'll need to compete with Rick Smith Jr, who is the world record holder for throwing a playing card 65.96m (216 ft 4 in) at a top speed of 92 miles per hour. He's also thrown a playing card a record 21.41m high. When you're that good, you actually can slice fruit with a playing card! You can even buy special cards designed for throwing, like the Banshees deck which adds a "sonic scream" when the cards whip through the air.

● Sorting: If you are hyperactive and have a healthy dose of OCD, perhaps this is a record for you to beat: taking a completely shuffled deck, and sorting all the cards by suit and number (Ace through King). In 2017, April Choi apparently managed this feat in a remarkable 18.53 seconds, although according to Guiness the official record is 36.16 seconds, and was achieved by Czech Zdenek Bradac in 2008. Alternatively, try removing all the Spades from a shuffled deck as quickly as you can - Isaac Louie's record of 11.51 seconds is yours to beat!

● Breaking: Maybe you think it's more fun to break things down than to build them up. Well this is a category for you: how about tearing playing cards with your bare hands? Bill Clark managed to tear two complete decks in 18.22 seconds. Even more impressive is the achievement of Scott Fraze, who ripped 13 complete decks in 30 seconds, for a televised episode of Guiness World Records: Primetime. Meanwhile Linsey Lindberg ripped 5 brand new decks within a minute in 2015, and is the female record holder. 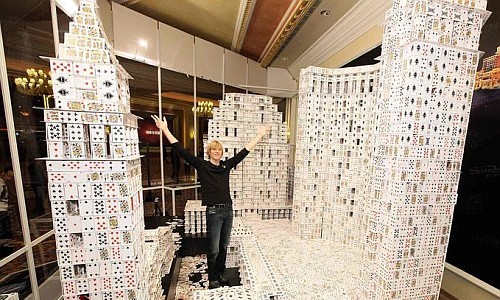 ● Balancing: Fancy yourself at card flourishing and doing card twirls? In 2018, Slovakian Pavol Durdik managed to balance a single playing card on his finger for no less than two hours and 15 seconds! Pavol also holds some other unusual records, including the most cards dealt while balancing an AA battery on a deck (212), the most cards dealt while balancing a table tennis ball on top of the deck (82), the most playing cards stacked on the back of a spoon (313), and the most cards stacked on a hand-held table tennis ball within one minute (36). His record of fitting the most playing cards inside your mouth (256) has since been beaten by Manoj Kumar (265). If you're a fan of flossing, you might want to challenge Duren Wilson, who managed to hold 64 playing cards between his teeth.

● Cutting: How slick are your cuts? You might want to challenge Sky from Italy, who managed a Sybil Cut in 1.24 seconds, and Kamal Aslam from India, who managed a Triple Z Cut in 1.05 seconds, and 10 consecutive Charlier Cuts in 8.64 seconds. The record holder for the most Charlier Cuts in one minute is held by Polish Marcin Kacmarek, with an astonishing 94. Brian Pankey has numerous records, including a display of the WERM within 2.09 seconds. And how speedy are your card springs? Joshua Robinson of the USA has held the record for the most card springs in 30 seconds since the year 2012, when he performed 17 within half a minute.

● Shuffling: Do you enjoy a good riffle shuffle? How many can you do within one minute? In September 2017, Serbian Strahinja Stamenkovic managed the current record of 31 times. The record for the most riffle shuffles in 15 seconds is 8 times, by Dan Sheikh.

● Dealing: Brian Pankey managed to deal 126 cards using just one hand within a one minute time limit. The record for dealing a complete deck of cards goes to Simon Akerblom of Sweden, who pulled this off in just 14.19 seconds. If you're good at flipping cards, try taking on the record of Guofinnur Tr of Iceland, who flipped an entire deck of cards one by one in 18.85 seconds.

● Picking up: Fancy yourself as somewhat of an expert at 52 Card Pickup? This is the classic "game" where the entire deck is scattered on the floor, and it's your job to pick up all the cards. If you want to get the record for this, you'll have to beat the Swede Alfons Lindsjo, who accomplished this in just 9.25 seconds!

● Guessing: Are you that guy that seems to lose at everything? Well perhaps this is a category for you. Try guessing the suit/value of a playing card, and the idea is to guess as many incorrectlyin a row as you can. In 2015, Mike K incorrectly guessed the suit and number of 391 playing cards in a row, before he finally guessed a card correctly.

● Buying: According to Joshua Jay's Amazing Book of Cards, the most expensive deck ever bought was a vintage hand-painted deck that dates from 1470. It was bought by the New York City's Metropolitan Museum of Art at a Sotheby's auction in London in 1983, for the royal price of $143,352. 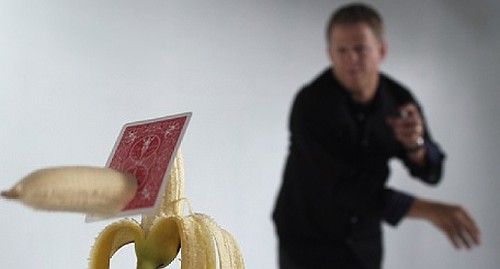 Clearly there are all kinds of novel categories, and if you want to take your card skills to record breaking level, try doing your favorite flourishes while spinning a basketball on one finger, juggling two tennis-balls, bouncing a golf ball on a mallet, spinning a toothbrush, or while doing a headstand. Or run a marathon wearing a playing card costume, which is what Lisa Wright first did in just under 5 hours in 2013. This record was subsequently beaten in 2016 by Jennifer McBain, a teacher who ran in just under 3 hours and 19 minutes in full costume, in order to inspire her students.

Want to make some records of your own? If breaking records like these appeals to you, check out the longer list of playing card world records over on recordsetter.com. Other sources used for this article include the official guinessworldrecords.com and recordholders.org.