To start off, I need you to do a quick exercise. Don't worry, it's not difficult, and I promise you're going to love this. I want you to watch this short video clip called the "Colour Changing Card Trick" which starts with a blue-backed deck of playing cards. Some of my readers have experience with card magic, but even if you catch the moves or know how this works, I think you'll enjoy this a lot:

So did you catch the moves? Or were you completely fooled, and did the colour changes completely fly by you? This is a fine example of a psychological phenomenon that we'll explain later. But first, let's try another little test.

A Quick Test About Playing Cards

To illustrate the same phenomenon, let's quickly test your knowledge about playing cards. If you're reading this, chances are you have used playing cards a lot. Perhaps you use them for playing card games, for performing card magic, for cardistry, or you're just a collector. Either way, you've probably shuffled a deck hundreds if not thousands of times. Shuffling, dealing, and holding a hand of cards - it's likely all second nature to you right?

Well, then you should have no problems answering some simple questions about the playing cards that you have seen many, many times, right? Let's assume a normal deck of traditional playing cards, like your standard Bicycle deck produced by the United States Playing Cards. Are you ready? You're going to ace this test, surely! But strictly no guessing - if you don't know an answer, just leave that question blank. Here we go:

1. Including black as a colour, how many different print colours do regular court cards have?
2. How many of the twelve court cards are looking to the left?
3. How many court cards are shown with a side view of the face rather than a front view?
4. Which Queen is holding something besides a flower?
5. Which King is not holding a sword?
6. Which Jack is holding a paddle/mirror?
7. Which Jacks have a fancy moustache?
8. Which Kings do not have a moustache?
9. What is the only suit where the Jack and Queen are not looking in the same direction?
10. How many of the 52 cards in a regular deck have an asymmetrical (one-way) design?

So how did you do? No, I'm not going to tell you the correct answers, because you might just cheat. I know that I would be tempted to do so, if someone gave me a test like this! So write down your answers, and then actually grab a physical deck of playing cards, and see for yourself. Seriously. You might be surprised at the results! And you might notice some details on those cards that you've never noticed before. If you get a passing mark of more than five right, I'll be very impressed. And if you did find that test too difficult, try this slightly easier online pop quiz about playing cards which will instantly give you a score out of ten.

Going through these questions has likely made you realize how little you've noticed about the playing cards that you've seen many, many times. Strange isn't it?! How can it be possible that you have handled a regular deck of playing cards so often, and yet not know the answers to basic questions like these?

I first came across these questions (which I've modified) in a blog post by Jan Isenbart, who is a magic enthusiast from Germany. He used this simple test to illustrate a phenomenon that psychologists call inattentional blindness, or change blindness. The idea of this is that when our attention is focused on something specific, it is possible for something else that happens right in front of our eyes not to register at all.

Perhaps the most well known example of this is shown in the following video. It shows the results of a Selective Attention Test, that was part of a prize-winning experiment devised and run by two American psychologists, Daniel Simons and Christopher Chabris. Many of you may already have come across this previously, but for those who haven't, what you need to do is the following: Count how many times the players wearing white pass the basketball." Stop reading this article and give it a try, and do genuinely concentrate and do the counting as instructed. The final result may surprise you.


Similar to this test is another one called The Monkey Business Illusion. If you're interested in reading more about this, check out the website from Simons and Chabris. It's a companion to their best-selling book The Invisible Gorilla. Some of the videos they have produced to illustrate inattentional blindness make for fun viewing. Daniel Simons' article "Failure of Awareness: The Case of Inattentional Blindness" is also a good read on the topic.

Inattentional blindness means that something quite significant can happen right in front of your eyes, and yet you can completely fail to register it. If we can miss a chest-thumping gorilla, then how many other things do we completely miss? Magicians have been using this principle to help them in card magic for a long time. One of the most well known examples is "The Princess Card Trick". It can be found all around the internet, including many kiddie websites, and it can easily be reverse engineered, so I'm hardly guilty of exposure by explaining how it works.

But first, try it for yourself here. Typically the online version works something like this. You are shown six playing cards, and you choose and remember one of them. When you click on the screen, one of the six playing cards has been removed - and it is exactly the one that you chose!

This can create gasps of amazement, but the secret is very simple. While you were focusing on remembering the playing card you chose, you tend to ignore the exact identity of the other cards are. So in actual fact all five cards shown afterwards are different from the original ones (if you didn't quite follow this, see a detailed explanation here). This trick can be made convincing by selecting a mix of cards with similar values and suits, but subtly switching some of the suits so that the change isn't as obvious. It's a little harder to perform a trick like this in the real world, but with a good presentation and some sleight of hand, there are ways to accomplish a similar effect (see a version performed by magician Lance Burton here). In one set of tests, this fooled 9 out of 10 people on the street that this was performed to.

The Princess Card Trick is another good example of inattentional blindness. Research has shown that what we actually see is often very different from what we think we see. We can't absorb everything, so our mind has to be selective, and it focuses on specific things, and eliminates other things that it considers to be distractions at that moment, effectively making us "blind" to certain details. 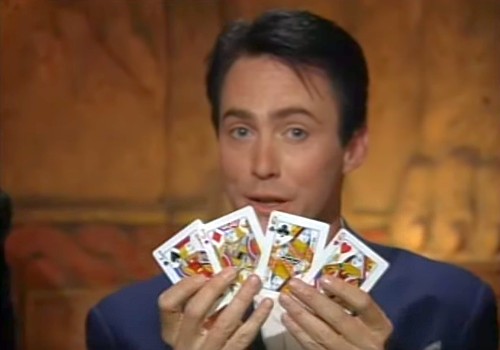 The phenomenon of inattentional blindness can be a very useful tool in a magician's toolbox. For example, when spectators are preoccupied by counting cards that you're dealing, they won't notice if those cards have been set-up or arranged in a specific order. Or if we take a playing card from the top of the deck and use it to point at another card on the table, they won't notice if we return that card to the bottom of the deck, because their attention is focused elsewhere.

Magicians sometimes refer to this as "misdirection". Good misdirection isn't so much about making a loud noise or sudden gesture that is a cheap shot at directing attention away from something. Rather it's about carefully constructing the plot of a magic trick so that all the attention is directed to something other than where the actual method happens. There must be justifiable reasons for having the attention directed elsewhere, and ideally this should be connected to your presentation. But when you can get all the attention of your spectators on something, then you can use inattentional blindness to get away with murder, if it is outside the scope of their current concentrated focus.

Perhaps we aren't nearly as good at multi-tasking as we normally think! We have cognitive weaknesses, like the ones demonstrated in the experiments above, and identified and discussed by psychologists. But we can exploit these cognitive weaknesses in a clever way to create powerful illusions. It's been well said that magic is not so much about what spectators are actually seeing, but what they think they are seeing. By manipulating their attention, we can manipulate what they think they are seeing, while having chest-thumping gorillas in plain sight do the magic for us, and yet remain completely invisible!

So why don't you dig out that deck of playing cards again, and this time have a more careful look at the details on the cards. There are undoubtedly many aspects of the artwork that have escaped your notice for all those years, due to inattentional blindness. Maybe this will even enable you to appreciate your playing cards in a whole new way!