Those of us who love customized playing cards can at times succumb to the temptation to be dismissive and cool towards an uncustomized, namely a standard, deck of playing cards. You know what I mean: your typical Bicycle rider-back deck, a set of "plain" courts and face cards. The kind of deck we've all seen a gazillion times, so that we consider it entirely traditional and perhaps even bland.

With that perspective, it came as somewhat of a surprise for me to discover that playing cards in the 1800s looked nothing like this. Let me place an imaginary deck of playing cards from that era in your hand, and tell you what you'd see. First of all, you'll immediately notice that the card-backs are all white. Yes really: a plain white, with no back design at all. Then you look at the court cards and notice that they are all full-sized one way designs. And as you fan the cards in your hand, you notice that there are no indices on the corners of the cards. When you finally discover the Ace of Spades, you notice that it looks rather plain and ordinary, with the ornate and over-sized design typical of modern decks being altogether absent.

So how did we get from this to the "standard" deck that we know today? Let's visit some of the historical curiosities that have played a role in shaping our modern playing cards as we know them today. 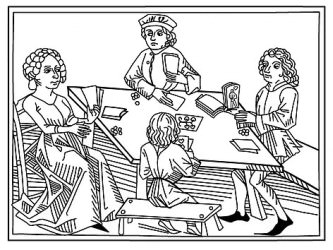 Today were expect a deck of playing cards to have red and black suits, but that's certainly not how playing cards first looked. In fact the original suits used in Italian playing cards in the 1400s were Swords, Clubs, Cups, and Coins, and each of these had unique artwork, which wasn't in any way strictly red and black. These suits were changed to Acorns, Leaves, Hearts, and Bells when playing cards were imported to Germany, which became a dominant producer of playing cards on the European market.

But all that changed when French manufacturers developed new techniques for printing playing cards. Already in the early 15th century, France had developed its own suits as we know them today: Hearts, Spades, Diamonds, and Clubs. But the real genius came when the French producers of playing cards divided these four suits into two red and two black, and simplified the shape of pips so that they could be cheaply produced by stencil while remaining easy for card players to recognize them. Suddenly it became possible to use stencils to manufacture large amounts of cards quickly and easily by using a single image of a king, a queen, and a knave, in combination with stencils for the suit icons.

Within a short time, the French had taken over the playing card industry, simply by sheer volume of production, since this method was far more efficient and simple than using wood cuts or engraving. As a result of this important commercial advantage, the French suits in red and black became familiar throughout Europe, with only pockets continuing with the German suits. And that's how we got the red and black suits that we still use today!

It is hard to imagine playing cards with suits other than how we know them today: Hearts, Diamonds, Clubs, and Spades. But the four suits have actually undergone a significant evolution of artwork and of names. These changes owe much to the history of playing cards, and is closely connected with the different countries that were world leaders in playing card production in different times.

Playing cards likely arrived in Europe via Egypt. The 14th century playing cards from the Mamluk period in Egypt used suits in four colours, using Cups, Coins, Swords, and Polo-sticks. These corresponded to the major pastimes and activities of the upper class, which was known to have a fondness for polo, for example. Italian and Spanish playing cards from that period also used Cups, Coins, Swords and Clubs as their suits, and are apparently indebted to the Mamluk suits that likely made their way across the Mediterranean with the help of traders. Even to the present day, these are the suits found on modern playing cards used in Italy and Spain, and are referred to as the Latin suits.

When Germany became the world's leading playing card producer, these suits changed to Acorns, Leaves, Hearts, and Bells, reflecting something of German culture and interests. Playing cards from nearby Switzerland are a variation of this, with Shields and Flowers being used in place of Leaves and Hearts.

But eventually France took over Germany's dominance of the playing card industry, with new methods of production made possible by simplifying the deck into red and black suits, and the help of the printing press. When the capital of playing card production thus returned to Western Europe, these red and black suits then became the standard suits, using the familiar pips as we know them today, although at the time they were called Coeurs, Piques, Carreaux, and Trefles.

Even though the pips that were introduced and popularized in France around 1480 are the ones we recognize today, they had not yet been assigned the names that are in common current usage. While the French word Coeurs indeed means Hearts and Piques (pikes) can be translated Spades, the word Carreaux (tiles) would best have been translated by the word Lozenge, which was the word used at the time to describe a rhombus or diamond shape. And while Trefles can be translated as Clover, the use of the term Clubs actually has a closer connection to the matching Italian suit of Bastoni, and hails back to the polo sticks of the Mamluk era. We simply can't be sure why some of the French card names were abandoned. But what we do know is that it is the English card names that gained traction, and that's what we still use today.

Interestingly, the English-French suits and court cards have a distinctly courtly flavour, while the Latin ones are military, and the Germanic ones are rustic. Some historians have suggested the possibility that the four suits are symbolic and represent the four classes of medieval society, which varied according to geographic and cultural origin where the decks were produced. For example, it is speculated that the Latin suits correspond to the church (Cups = chalices), merchants (Coins), peasantry (Batons = clubs), and military (Swords). Similarly it is suggested that the German suits correspond to the church (Hearts), nobility (Hawk Bells), peasantry (Acorns), and middle class (Leaves); while the French suits correspond to the church (Hearts), citizenry (Diamonds = tiled paving stones used in churches), peasantry (Clover = pig food and husbandry), and aristocracy (Spades = pikes or spearheads).

At any rate, the major suits that we use today were firmly established in France by the end of the 15th century, and haven't undergone any real change since then.

Prior to the the start of the 19th century, playing cards typically all had white backs. These convenient sources of paper could easily be conscripted for other uses, and were often written on and used for letters, notes, or drawing; and even used as credit notes. One extraordinary usage dates back to the 18th century in the Netherlands, where impoverished mothers left their babies at orphanages along with a message on the back of a playing card - the cheapest paper available - which would function as a form of ID, and had a message from the mother along with the baby's name. Mothers that planned to return some day would leave just half a card, keeping the matching half as future proof of their parental connection.

However the white backs also created practical problems: cards could easily become marked, and this presented an obvious issue when playing card games. Options were limited, especially if money was tight - it was costly to purchase a new deck, and returning the cards to the workshop for cleaning wasn't an ideal or permanent solution either. Manufacturing techniques did improve in time, but the use of intricate patterns or small pictures on the back initially began as a commercially smart move to hide faults in the paper, thereby enabling producers to use cheaper grades of paper, or to minimize the issue of marked backs. There was a need to hide any signs of wear and tear, and that is what led manufacturers to print designs and pictures on the reverse of playing cards, by printing repeating geometric patterns of stars or dots.

The first card backs with an actual original design were created in 1831, to commemorate the coronation of King William and Queen Adelaide. With the development of full colour lithiography, it became possible to produce card backs that were richly decorated, and these began to be produced from 1844 onwards. It didn't take long before card backs were used for advertising and marketing, as well as artistic designs that helped make the cards more attractive or highlighted the ability of the artist and designer. 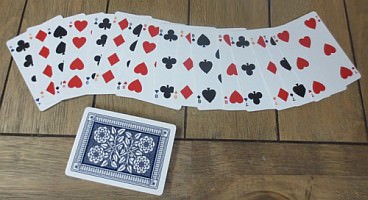 Poker-sized cards may seem "large" in comparison to bridge sized cards, but originally playing cards were even larger in size than the ones we use today. The reduction in size from these larger cards to the "poker-sized" ones as we know them today is a later development in playing card history.

The designations poker-size and bridge-size simply refer to the size and don't limit their usage to particular types of card games. Bridge-size cards can equally be used for poker, and poker-size cards can be used for other games like BlackJack, and in fact are typically used as such in many casinos. But these two sizes are now more or less standard, and date as far back as 1880s in playing cards printed by USPCC. Magicians and cardists tend to have a strong preference for poker-sized cards, due to the fact that their increased width makes them more suitable for manipulation, card sleights, and flourishing.

Tarot cards appear to have had a separate origin from regular playing cards, and were not a predecessor to the standard 52 card deck, despite claims of some that Tarot cards existed first. In fact the earliest surviving Tarot cards date from a period much later than regular playing cards, and they appear to have had an early use as additional trump cards. They consisted of 22 separate designs with allegorical illustrations, and were added to a standard deck in order to create a larger overall deck which was used first of all for gaming. While this larger deck possibly also functioned as a means of instruction and education, these extra cards were not first of all added as a result of an interest in the occult or for fortune-telling.

As part of a 78 card tarot deck that could be used for more elaborate and complex games, tarot cards were only used for occultic cartomancy for the very first time around 1750. The symbolism and significance of the original illustrations that do date back to Renaissance Italy has been lost over time, and it is most likely that the original artwork of these additional cards simply reflects the 15th century cultural fashions of the day. The Tarot deck may have gained a life of its own in occult circles today, but this usage doesn't pre-date the standard deck.