Maybe you have a favourite playing card, and perhaps you even have a pet name for it. Many individual playing cards have nicknames that are in common use among card players, and it's not hard to see how this comes about. In many card games, at a certain point you reveal the identity of the cards you have in your hand, so you might announce that you have "pocket Aces" (two Aces), or "a dog from every country" (a hand of four cards in each suit), or you might refer to a specific card by a commonly used designation like the "Suicide King" or "Black Lady". Here's a list of some of the more popular monikers that have been given to individual cards over time:

The King of Hearts is usually depicted with a sword, although earlier decks often featured him with a battle axe. He is typically referred to as the "suicide king" because on a traditional deck he is pictured as stabbing himself with a sword, or at least holding a sword behind his head. Even many custom decks will adopt this idea, with variations according to the theme of the deck. The King of Hearts is the only king without a moustache, but unfortunately we simply don't know for sure how that difference originated.

Man With the Axe

This designation for the King of Diamonds reflects the fact that this is the only king not carrying a sword. Kings are sometimes also referred to generally as "cowboys".

The nickname "Black Lady" for the Queen of Spades is closely connected with the game of Hearts, which is often referred to with alternative names like Black Lady, Black Maria, and Black Widow. In this trick-taking game, the idea is to avoid collecting points, with Hearts cards all worth one point each, while the Queen of Spades (sometimes dubbed "Calamity Jane" in this context) costs a massive 13 penalty points. Other names for this card include Bedpost Queen, Dirty Gertie, and Molly Hogan. She usually is pictured holding a sceptre.

The Queen of Clubs is known as the "flower queen" for an obvious reason - she is usually depicted holding a flower. Some decks picture all the Queens with flowers, with the style adjusted according to their suit.

Jacks are also called Knaves, and are inferior to the more regal Kings and Queens, making them more playful. The Jack of Diamonds is known as the Laughing Boy, and in some variations of Poker and Black Jack, players are expected to chuckle every time this card is played or drawn.

The Scots consider the Nine of Diamonds to be an unlucky card, and its nickname goes back to the 18th century. Why? We can't be entirely sure, and several different ideas have been suggested. One possibility speculates that the orders for the Glencoe Massacre of 1692 ("Kill them all", which resulted in the slaying of 38 Highlanders), were written on a Nine of Diamonds card. It's also been noted that Secretary of State Sir John Dalrymple, who contributed to this massacre, had a coat of arms with nine diamond-like shapes.

This designation for the Seven of Diamonds appears to have originated in the mid-1900s in Denmark, and is used in trick-taking games like Bridge. As an unofficial and optional side-bet, the partner of a player who wins the last trick of a hand with a Seven of Diamonds must buy him a beer.

Also called the Devil's Four-Poster Bed, this name for the Four of Clubs is derived from the design of the pips on the card, which can be imagined to be the four posts of a bed. This card is considered by some superstitious folk to be a curse, apparently ruining any hand that includes it.

Traditionally the Ace is the highest ranking card, but this card's actual value can vary on the game played. The Ace of Spades is commonly referred to as the Death Card, although the exact origin of this name can't be identified with complete certainty. Is there a connection with the fact that this was the card designated to be marked with a tax stamp in England in the 1800s? During this time, forgery of an Ace of Spades was considered a capital crime punishable by death. Or is there truth to the legend popularized in many films about the Vietnam War? It has been suggested that the Viet Cong was so terrified by the Ace of Spades, that American soldiers used it to frighten their enemy by wearing it on their helmets and by leaving it on dead bodies. Perhaps the origin of the term is much simpler: a spade is also a shovel, an instrument commonly associated with digging graves. 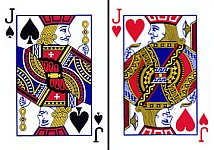 Card combinations: There are also many common terms for particular card combinations, many of which originate with Poker. For example the “Dead Man’s Hand” is said to be the hand held by gunfighter "Wild Bill" Hickok when he was murdered, and contained two black Aces and two black Eights. A pair of Aces can be dubbed as "Pocket Rockets" or "Snake Eyes", while the King-Ace combination is frequently known as "Big Slick". Countless others nicknames for specific card combinations exist.

Watch your language! Many terms from the world of playing cards have also entered the English language. For a long list, see this previously published article: The Impact of Playing Cards on the English language. Many of these terms originate from trick taking games or poker. The fact that expressions like "follow suit", "have a card up your sleeve", and "come up trumps" are commonly used and understood by almost everyone, says a lot about the popularity of playing cards, and their impact on culture generally.

Other nicknames: The above list is by no means complete. There are many localized nicknames, and virtually every playing card has acquired a nickname or even multiple names at some point in history. For example, the Joker is also called by names like Wildcard, Trump Card, Best Bower, The Fool, and The Bird. You'll find an exhaustive list of playing card nicknames over on Wikipedia.

Giving playing cards names shows that they are a big part of our life. When we think about a deck of cards, we aren't just thinking about 52 pieces of cardboard, but our friends at the card table or our accomplices in a magic trick. The good news is that this means that when you add a new deck to your collection, it's not really a matter of wasteful spending, but an exercise in getting 52 new friends!

Did we miss one of your favorite nicknames?  Let us know in the comments!