PlayingCardDecks is celebrating its 5th anniversary. So to help celebrate, I'm writing some Top 10 lists, and I thought it would be fun to come up with some great ways that you can use your playing cards in a less conventional fashion than what we normally do. After all, most of my readers do own a lot of decks of playing cards. Most of us are good at collecting them, and maybe we even use them occasionally for things like playing card games, card flourishing, or card magic.

But how about we learn some other activities that we can use our playing cards for? Some of the "how to" videos below will teach you essential skills that everyone should learn how to do, like shuffling cards properly. Others will teach you less common skills, like throwing playing cards, which you can use to impress your friends or family. All of them are easily learned and mastered.

So without further ado, let's get started with some "how to" tutorial videos that will help us acquire new skills with our playing cards!

1. How to throw a playing card 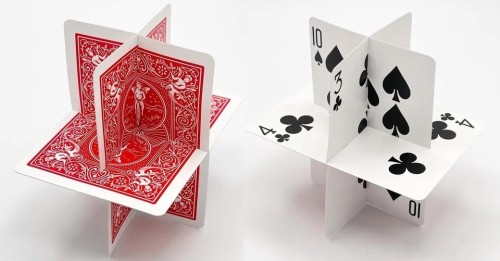